“Simply remembering what happened was an act of resistance.”

It is fitting that I post this entry on May 1, the beginning of Asian-Pacific American Heritage Month. Today’s Google Doodle commemorates Ruth Asawa who, along with her family, was sent the Santa Anita racetracks and the Rohwer concentration camp during World War II.

I began this blog on February 19, 2018, the 76th anniversary of Executive Order 9066, when President Franklin Roosevelt authorized over 120,000 Japanese-Americans and others to be incarcerated, six weeks after Pearl Harbor. This included 5,918 children born in the assembly centers and camps, 1,118 people from Hawaii, and 219 non-Japanese (mostly husbands) who voluntarily accompanied their families.

On April 27, I attended the 50th Annual Pilgrimage to Manzanar, one of ten camps where between 110,000 and 120,000 Japanese-Americans were incarcerated during World War II, and one of two in California.

I first heard about Mazanar when I took a course called “The Narratives of Internment” during my sophomore year at Smith College. We read poetry by Mitsuye Yamada,  John Okada‘s historical fiction No-No Boy, Miné Okubo‘s Citizen 13660 (1946), “the first illustrated memoir chronicling the camp experience.” But the book that had the most impact on me, personally and for my career was Jeanne Wakatsuki Houston‘s Farewell to Mazanar.  It describes the author’s childhood experiences at the Manzanar, located in the desert near Independence, CA and the hardships that her family endured.

At camp, Jeanne makes friends with a Japanese girl, whose adoptive parents are a Japanese man and his half-black wife, who was passing as Japanese to stay with her family. I was intrigued because I had thought that interracial marriage was illegal. I decided to look into it and uncovered some heartbreaking stories of families torn apart, mixed-race children in orphanage being ostracized, including Dennis Tojo Bambauer who didn’t know he was Japanese until the military took him to a Japanese orphanage. The orphans lived in the Children’s Village at Manzanar, though some were re-united with their families in camp.

There was even a case of a family incarcerated despite not being Japanese-American, because the husband had his Japanese-American stepfather’s surname. My class project became one of my long-term research interests. Over the last ten years, I have learned that there were several hundred mixed-race families in the camp, and have expanded my research to the history of mixed-race Japanese-Americans and their families in the U.S. and Japan, learning about some fascinating and important people such as Takamine Jokichi, in the early years of interracial marriage between Japan and the United States.

While reading Farewell to Manzanar, a classmate asked if we could go. To our delight, half of my class and I attended the 38th annual pilgrimage. We spent four and a half hours one way on the bus with former incarcerees. None of them had been in Manzanar, but it was the only location at the time that had a pilgrimage.

As we neared the camp, we were struck by the beauty of the flowers and mountains, which surrounded the site.

The surrounding mountains were a stark contrast to camp.

There was little left, the remains of a block garden, a replica guard tower, a few signs, the original guardhouse, and the visitor’s center in the auditorium, which had been used by Inyo County as a road maintenance facility. The buildings had been torn apart right after the war, much of it re-used by local communities.

The 38th pilgrimage was dedicated to Sue Kunitomi Embrey, who had worked to make Manzanar a National Historical Site, as she had died shortly after the 2006 pilgrimage. The ceremony began with a rendition of “Ue o muite” (Look Up), re-named for American audiences to “Sukiyaki” which had been a hit in the U.S. in 1963. This was followed by a process of flags bearing the camp names, speakers, and an interfaith service at the graveyard.

It was a haunting experience, to be surrounded by so many who had been sent to such desolate places simply because of their ancestry. Had I been born forty-five or more years earlier on the west coast, I would have been one of them. But, because of the racist, patriarchal attitudes, the Western Defense Command believed that children with non-Japanese fathers were culturally more American. Therefore, families with children like me, would not only have been allowed out of the camps, but been permitted to go home. But families with non-Japanese mothers, while permitted to leave the camps, could not go back to the restricted areas and had to find a new place to live. Nor were interracial couples without children permitted to leave. But this did not prevent such families from being sent to assembly centers. Despite noting that such families and children in care of non-Japanese foster parents were exempt from evacuation, this was not the case, as children living with white foster parents were also incarcerated. There was at least one exception, Ronald, Hirano, a Deaf boy who was temporarily adopted by an acquaintance and given special permission to stay to continue attending the California School for the Deaf. Other Deaf people and those with other disabilities were not as lucky. 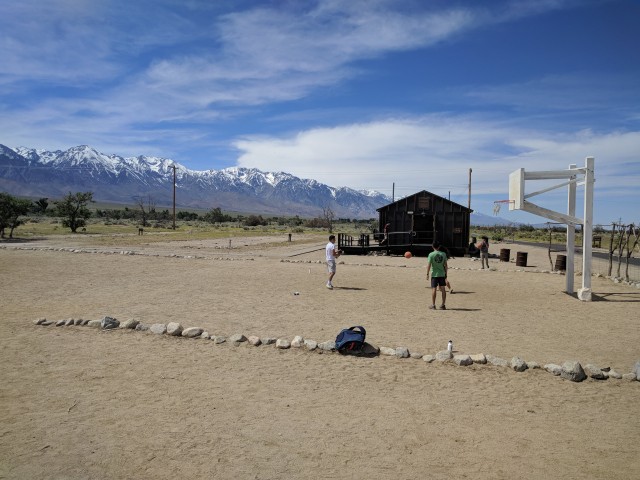 The incarcerees lived in hastily-built, tar paper shacks without proper heating or water. The camp was over 540 acres, surrounded by barbed wire. Inside were 67 blocks, including 36 residential, two staff housing, one administrative, two warehouse, one garage, and a military police, and a hospital.  Each residential block had 14 barracks, a mess hall, recreation hall, two bathhouses, a laundry and ironing room, and a heating oil storage tank.  Later, a Bank of America branch and Sears Roebuck cataloger store would be added.

The bathrooms offered no privacy and incarcerees had build their own partitions. 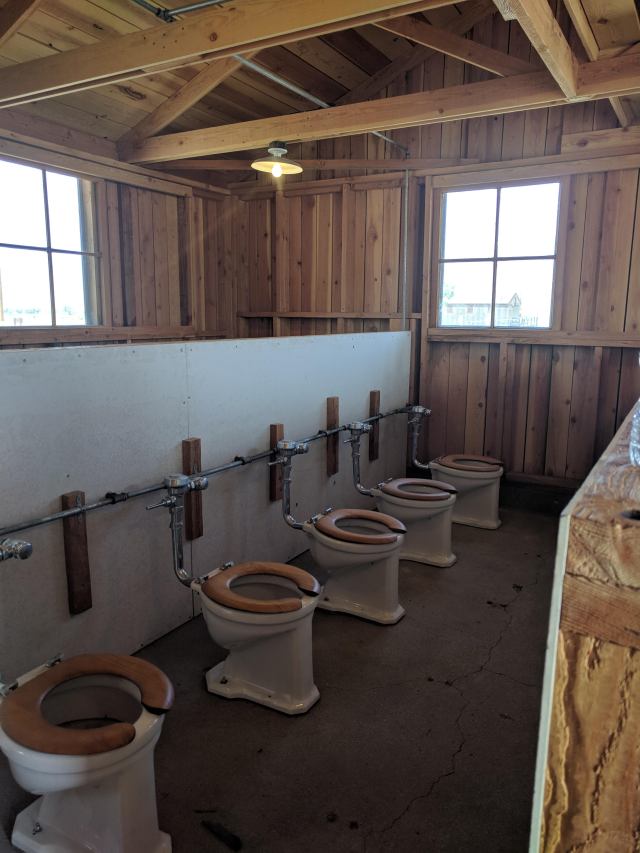 But the most gratifying for me were two new addition. The first was the Children’s Village, which is still under archaeological investigation. I had read Catherine Irwin’s Twice orphaned : voices from the Children’s Village of Manzanar several years earlier. Unfortunately it hadn’t been published when I was doing my undergraduate research. But it provided a lot of valuable information and showed how different the experiences were for the orphans than those who were incarcerated with their families. 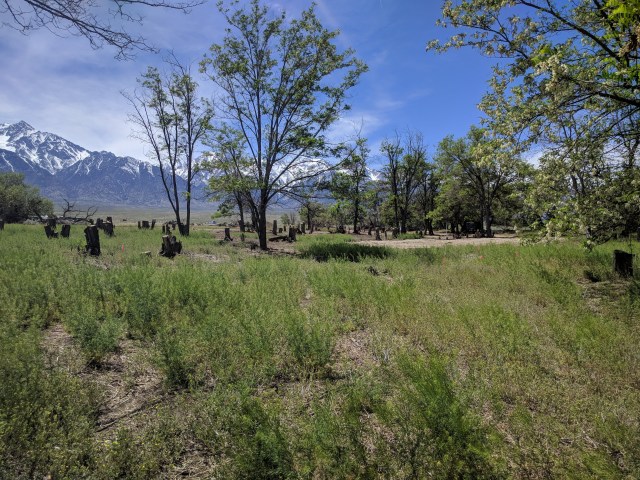 The other was a replica of a classroom. This included information on children with disabilities, another of my research interests. I learned about the Helen Keller School at Tule Lake, a short-lived program for children with disabilities, a few years ago. I also found letters from Deaf and blind schools across the country offering to take children into their institutions. To my surprise, I found that camp newspapers had extensive coverage of “crippled children” with disabilities such as harelip, partial hearing and sight loss, paralysis due to polio, etc, as well as wounded soldiers. But this was the first time that I found any mention of special education programs in any exhibits and it was gratifying to see that it was finally being included. 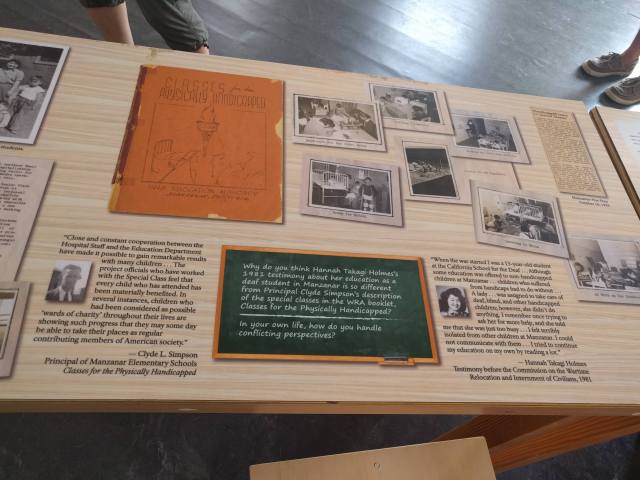 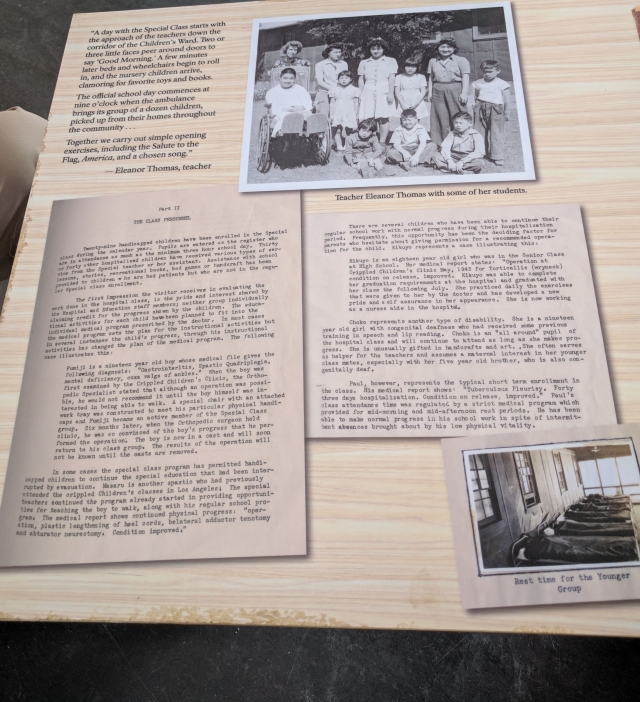 Seeing the camp with these additions made it all the more heartbreaking. But I am grateful that more of this story is being told, to include those who have been overlooked.

This entry was posted in history, japanese-american and tagged #disability, #manzanar. Bookmark the permalink.